I often get the question: Which microphone is the best, or What microphone should I use, I want just one that is good for everything!

My reply is very often: How long is a piece of string?

The most common answer to that is: It depends!

And there you go! There is your answer!

It depends on what you are after!

Many seek the perfect and clear microphone sound, only to realize that it wasn’t what they were looking for. Many microphones that have been used throughout recording history that has been widely used is because they have a certain character, giving a certain sound. So in order to help you in your choice of microphone I will go through the simplified basics of different types of microphones.

Please note that this is the simplified basics, if you want to go in depth on microphones you can do so for several hours. Which is true for just about anything… 🙂

First of all – a microphone contains a membrane that registers the vibrations (or movements) in the air. It is the equivalent of our ear. So, a microphone is the ear of the audio recording chain.

*Dynamic mic’s does not need a power source, the membrane react to the movements in the air and induces a current that can be recorded.

This makes the membrane heavier to move and you often need more energy in the sound to be able to get it registered by the membrane.

*Condenser mic’s does need a power source, either a battery inside the mic itself (usually 9V battery), or phantom powered by the equipment it is connected to (usually 48V).

Since it’s already driven by power, the membrane can register smaller changes in the air, making it more sensitive that a dynamic mic (in general).
Keeping above in mind, should you want to record gentle sounds, condenser mic’s would be the natural choice, with the downside that it is more sensitive for transients (spikes) that can cause unwanted distortions. Condenser mic’s are often more clear in their sound with less colouring.

Should you want to record that are very dynamic in it’s range, rich with transients, the natural choice would be a dynamic mic. And dynamic mic’s often have their own character (all mic’s do, not only dynamic) and colouring of the sound.

The size of the membrane on the microphone is also essential as to how it registers the movements in the air. A smaller membrane often has less span to move in, making unwanted distortions more common as a result of transients in the sound.

As to where a bigger membrane often has more room for movement, making the risk for unwanted distortions due to transients less (although, that risk is always present).

Larger membrane usually gives a cleaner or cleared sound than a smaller membrane.

Microphone characteristics. This one is tricky. There are a lot of variations on how and where the microphone has it’s ”optimal pickup range” in terms of direction of the sound. There are omnidirectional mics that reacts to sounds in every directions, there are directed mics that reacts to sound in a specific direction and there are variations in between. The important thing is that you know what characteristic the mic you are using have, so you can use it and place your sound source within the ”optimal pickup range” of the mic.

Bear in mind (no, not beer in mind) that above is very general basics, and there are unlimited variations and examples that you can find proving above wrong by comparing different microphones. So keep reading and look for input from other sources to get a better understanding of microphones.

Last but not least, microphone usage.

*The closer to the sound source, the greater risk for unwanted distortion, but also less of the surrounding sounds and the room itself.

*The longer from the sound source, the less risk for unwanted distortion, but also more of the surrounding sounds and the room itself.

This being said, use your creativity and experiment. Where and how do you get the sound you are looking for? Closer to the mic, or from a distance? Does it sound better if you stand in front of the mic or behind it? What happens if you mix one take in front of the mic with one take behind the mic? (Yeah, I am serious about that question!)

One more quick note regarding mics. Frequency. Different mics have different frequency curves, which means that they are meant for different purposes. I.e. a large membrane mic is better at capturing low frequencies than a small membrane mic. Look at the mic’s frequency curve to match your sound source, but don’t be afraid of experimenting with mic’s. Who knows, maybe it is a good idea to record song with a mic meant for picking up kick drums? (Yeah, I am serious about that question too!) 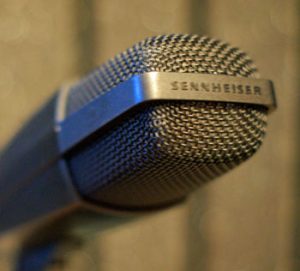