The compressor is a most usable and interresting thing. With this marvellous thing, you can affect the dynamic of the soundsignal.

This may sound a bit wierd at first, but once we take a deeper dive, it will hopefully make more sense.

Just a quick background. A soundsignal is measured in deciBels (dB). There are a lot of variations to different dB scales, and I will not go into depth with those for now, so let’s just generally agree on that dB is the scale that measures the energy of the soundsignal. The greater engergy, the louder is the sound and the larger the dB value will be. And the opposite, the smaller energy, the quieter the sound is, and the smaller the dB value will be. So loud = high dB. Quiet = low dB.

If you look at a recording of a human voice, either spoken or sung, you will see that the soundwave varies a lot from very high peaks to very small peaks.

When you listen to such a file, you will eventually see the correlation between louder parts and higher peaks, and quieter sections with lower peaks.
Keep this in mind.
There are two more steps to take to fully understand the compressor. The first is the Threashold and the second is the Ratio. (Then there is the attack and release, but let’s save those for later.)

The threashold is a value in dB where you want the compressor to start working. As soon as the soundsignal gets stronger (louder) than this value, the compressor kicks in with the force that you set on the Ratio knob.

To set it in perspective.

The attack and release values (if available) determins how fast the compressor reacts when the signal crosses the threashold, and for how long after the signal has crossed the threashold the compressor should keep working. The benefit of those functions is to get a smoother compression or a harder compression, depending on how you set the values. With a fast attack and a fast release, you can get a pumping sound (which can be good for i.e. drums or bass), while a slow attack and slow release will get a smoother compression. But that is not entierly true. All depends on the soundsource, so you need to experiment to gain knowledge on how to best make use of the compressor.

Well, that is in short terms what the compressor does, but nothing about what you can use it to, or why it is good to use it.

The recorded signal is most often very dynamic, meaning it has it’s loud (strong) parts and it’s more scilent (quiet) parts. If you want to make the signal stronger (louder) you will boost the entire signal, and the limit of how much you can boost it is the strongest peak of the signal. Sometimes you want to boost the signal more. So the compressor will ”push down” the strongest peaks, giving you more room to boost your signal, since the strongest peaks now have a lower dB value than before the compressor was applied. The downside is that you have less dynamic in your sound signal. And also, when you boost your sound signal, you also boost the background noise, both the background where your recorded, and the noise that all electronic equipment emits.

There is a Golden rule that I learned from a man much wiser than me:
Use the compressor a little when recording, and than a little when you are mixing. This to prevent the sound signal from being overcompressed in one go.

This I have developed to a thing of my own. When I record, I run the microphone through a Mic Preamp with compression included. (The one I use is a dBx 286a, as to where the more modern version would be the dBx 286s.) The Mic Preamp is connected to a mixer, and then I run one of the Aux sends through another compressor that I compress even harder. And then I blend in the output signal from the secondary compressor with the signal from the mic preamp. This way I boost the lower parts with the highly compressed signal, and keep the dynamic (with only a little compressionrate on the mic preamp) from the original signal.

This can also be done within your recording/mixing software. The way you do that is that you clone the track that you want to apply this technique to, make sure not to move the soundfile sideways. Should you do this, the effect will be totally different (and can be awesome in a different way).
The ”original” track, apply a little compression to this, and then apply a heavier compression to the clone track. Then adjust the volumes to find a balance between the two. Typically the original track is stronger (volume wise) than the cloned track. But as I said earlier, every sound signal is uniqe so you need to find the balance between the two tracks. 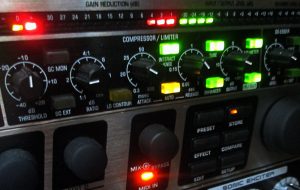